Marriage is a huge commitment. As with most life-altering decisions we make, there is a certain level of stress that comes with the territory. Whether it's attempting to have the wedding of your dreams on a limited budget or it's trying to figure out who sits where at the reception, there is undoubtedly going to be some stress involved in planning a wedding. However, figuring out how to get married shouldn’t be one of the many things that cause stress. This article will attempt to make clear what a couple seeking to get married needs to do in order to have a valid marriage in Virginia.

How to Get Married in Virginia 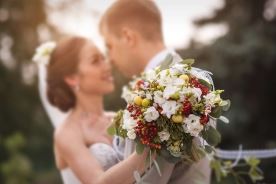 How old does a person have to be in order to get married in Virginia?

The minimum age at which persons may marry in Virginia is 18 unless a minor has been emancipated by court order.

Do I need to obtain a marriage license in order to have a valid marriage in Virginia?

How do I obtain a marriage license?

The parties wishing to get married must state to the clerk/deputy clerk/or judge, under oath, the information required to complete the application for a marriage license.

What is a marriage certificate?

Can I marry anywhere in Virginia?

Yes. You can apply for a marriage license in any city or count in the Commonwealth of Virginia.

Does a marriage license ever expire?

and receive an additional license.

Who can officiate the ceremony?

Second, by filing a petition with the clerk, the circuit court judge may authorize any person or persons to perform a wedding ceremony as long as that person or those persons are residents of the circuit in which the judge sits and have paid a $500 bond.

Others who are authorized to perform a wedding ceremony include:

Any person who performs a wedding ceremony when he or she is not authorized to do so faces up to one year in jail and a fine up to $500.

Are there any types of marriages that are prohibited in the state of Virginia?

In sum, two people with the capacity to marry may enter into a marriage that is not void under Virginia law after obtaining a marriage license and having a ceremony performed by a person who is authorized to perform such ceremony.